I hadn’t planned a second post for this week, but I feel the need to write this story.

In May of 2007, my husband brought home a stray puppy that had been roaming the

busy city streets of Tampa. We had our beloved Piezon in those days, plus our cat, Sneakers, and weren’t really up for a third pet. We both hoped that my training would get this pup into shape for us to find her a loving forever home.

Piezon wasn’t crazy about having another dog in the house either. Oh, he was certainly kind to her. He was just used to my full attention and was always by my side. With this new pup around me so much, he went off into other rooms by himself more often.

I named this sweet little girl Blaze for two reasons. One, she had a fiery brindle coat. Two, she was a bit timid, and I wanted her name to be a word with an energy of vibrancy and confidence.

Piezon was such a friendly guy. I wrote in his eulogy about how he loved all living things and was never shy or timid. Little did I know how much he would help me train Blaze and bring her out of her shell. When she’d hide from visitors who came over to our house, Piezon would run right for them, which made her curious. She’d have to come and see what all of his excitement was about. By simply being himself, Piezon is pretty much the one who trained Blaze for me. She emulated him. 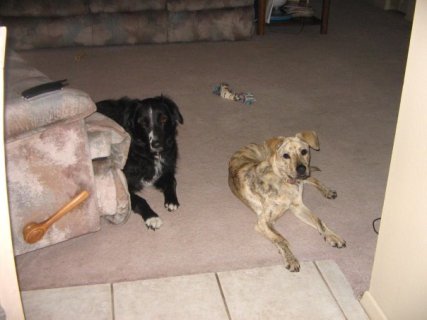 I put out flyers and brought her to adoption events. Five months went by, and I was growing fonder of Miss Blaze. I told my husband that after six months she would be ours. Right when I made that decision, our dog-walker’s mom showed interest in adopting her, and soon after, Blaze was off to her forever home.

I was able to keep up with Blaze’s life through social media. Her new family named her Gioia (pronounced, Joy-ah), which in Italian means, Joy.

I saw Gioia in person twice in the coming months, and then a lot of time went by without personal contact. Would you believe that when we met again years later, she remembered me?! It makes me cry

just thinking about it.

I haven’t seen her in person for many years now, but watched her life through social media. Over this past weekend, I got word she left this world for the next and it has me feeling emotional. I also feel very sad for Gioia’s mom.

Thank you for indulging my story about the Blaze who lit up five months of my life.