With all that’s going on in the world, my husband and I like to escape to a different era by watching Turner Classic Movies. We recently enjoyed a classic that we learned was the basis of a television series which aired in 2007-2015. This got me to comparing the two, and how they portrayed their characters.

Have you ever heard of the 1959 movie, The Best of Everything? 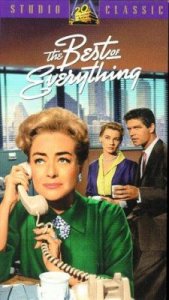 In this movie, Hope Lange plays the character, Caroline Bender, who starts work as a typist at a publishing company in New York City. Caroline is an ambitious college graduate who intends to move up the ladder to become an editor. The story focuses on the personal lives of Caroline and her two friends/roommates April and Gregg (Gregg is a woman). Since the movie takes place in 1959, most of the women are secretaries and talk about finding a husband. To call the men in this movie sexist is an understatement, not to mention the extra-marital affairs.

Does the story remind you of any television show you’ve seen over the last five to ten years? The TV series Mad Men was based on the movie. The series starts similarly, in the same era, with an ambitious character named Peggy starting a job as a typist at an advertising agency in New York City.

The layouts of the offices in both are almost identical. The boss from Mad Men, Roger Sterling, has the same personality of the boss from The Best of Everything, Fred Shalimar.

In case you haven’t seen it, in Mad Men, the men have extra-marital affairs with unprincipled women in their

office. There isn’t one person with morals. The women are hateful to each other and none of them have girlfriends. Aside from the good looks and mysterious past of the main character, Don Draper, nothing about him is likeable. In 2015, I wrote a blog post about Mad Men, but I was only on the second season at the time. By the end of the series (7 seasons in all), I was extremely disappointed.

If you’d like to see the TV show, skip this paragraph for my assessment of the end of the series. Not a single character in Mad Men has any growth. They all remain narcissistic drama queens in the end.

I enjoyed the 1959 film better, because the characters are more likeable and realistic. The narcissism is tamer. The women are softer than in the series. The three troubled main female characters each have a monogamous relationship, but their boyfriends don’t treat them with respect. The women in the office are friends and care about each other. The men are secondary characters, and yes, most of them are despicable, but they do throw in a couple of good guys.

The creator of Mad Men felt he was showing the hypocrisy of that era. People spoke of morality, and so did their entertainment, while in person they behaved like degenerates. Where the creator erred, was making all the characters fully narcissistic and/or insensitive.

For the time of the movie (1959), it was surprisingly truer than the present-day series. They showed honest depictions of troubled characters, while at the same time, gave most of them a heart.

Have you seen the movie or the television series? If so, what did you think?

20 thoughts on “The Best of Everything”