I woke up on Monday morning (yesterday) feeling very disoriented. Why?
Take a look at the photo below that I posted as my header back in January.

Except, this photo isn’t the one from January. I took the same photo the day before yesterday, on Sunday, April 14! After it snowed all day, and I went to bed that night, I woke up on Monday having forgotten about it. I thought I was waking up to April spring sunshine, but instead, the bright, white reflection pierced my eyeballs.

Seriously, the scene out my window felt wrong and really did disorient me. For a moment, I went through the belief bias effect.

Sorry to jump around, but back to Sunday, the snow day. The forecast was for a dusting of snow. I don’t know about you, but to me, in the picture below, it doesn’t look like a dusting. 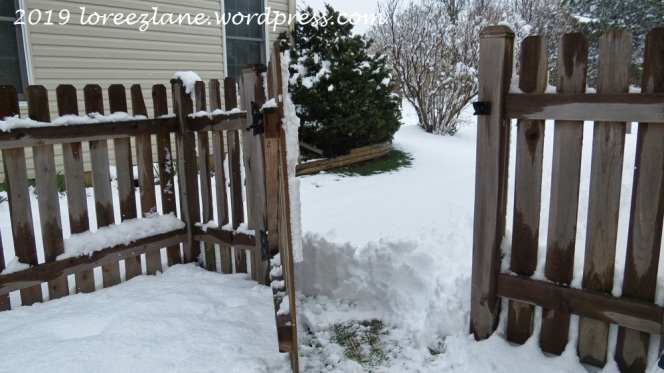 At first I was mad. How dare they lie to me. I mean, I recalled snow in April before, but never this much. It usually really is a dusting.

This was my ugly feet wearing sandals on Monday and Tuesday last week. How could I have to switch from bare skinned toes to fuzzy boots . . . in April? I posted my disgust on facebook, and what did I get? Someone going political on me and blaming global warming. As if I’m guilty of this atrocity and should conjure up some magic spell to stop this from happening. Sorry, not adding a guilt-trip to my already aggravated nerves.

So, as it continued to snow all . . . day . . . long, without letting up, I grew more shocked than angry. Was this a nuclear meltdown? How could it keep coming and coming . . . in spring? I already packed away my snow boots, but I needed to lug them out to go outside with the dog. Boy, how I dreaded it.

Max was even shocked when he first stepped out there. What the . . . ? 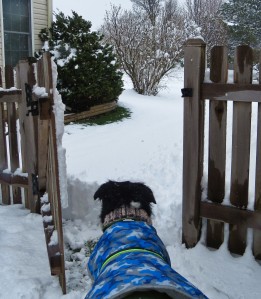 But then, his shock turned to exuberance. Yay, time to play.

So, I gave in and decided to go with the flow. If I can’t beat it, I might as well enjoy it with my truest friend in the world. His birthday was Sunday on that day of the snow. He turned eleven years old. Why not celebrate with my old boy? They aren’t with us long enough as it is.

My dogs have been my inspiration to enjoy life, no matter the challenges we face. He and I both have pretty significant arthritis pain, but who cared. We had fun.

P.S. Snow has already melted. It’s springtime again and a gorgeous day. Back to sandals, but should I pack away my boots?