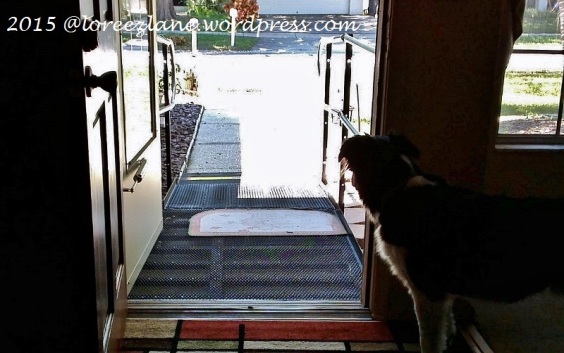 Max hasn’t seen his human dad in three weeks and is looking for his return.

“I’ll wheel myself home in this chair if I have to. I’m not going back to the hospital rehab.” My husband, Gary told me over the phone.

After three weeks in hospitals from his injury, my husband was supposed to be transported home from his post-operation appointment. The transport company confused their orders and wanted to take him back to the hospital. I was proud of him for not allowing them to take him to the wrong place, but how in the world were we going to get him home?

“Don’t worry. I’m coming home.” He hung up. I never heard him so determined, and I feared he might really wheel himself the four miles to our house. I imagined him holding his legs up with his injured feet in the air wheeling the chair down busy roads. 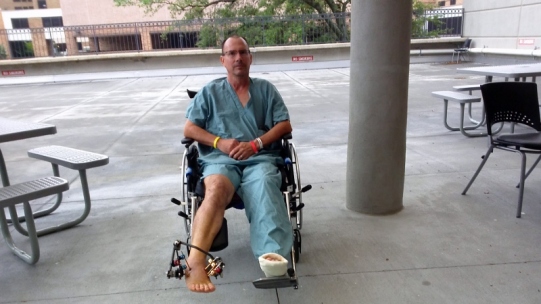 While he tried to figure something out with the transport drivers, I invited the three women who waited outside to come into my home. They were healthcare workers who had insisted they needed to do an evaluation on his home healthcare that very day. They had been waiting outside in their cars for him to arrive. I was still unhappy about their intrusion, but felt I had no other choice at the time.

Forty-five minutes later, at almost eight o’clock in the evening, the van transport pulled up to our house with my precious cargo aboard. The driver had called the hospital, and they confirmed Gary had been released for home.

Dogs are always happy to see their owners when they arrive, but I’d never seen our Max in such a loving and nurturing state. As soon as Gary wheeled through the door, Max instinctively headed to the injured feet and started licking. Tears flooded my eyes. I wanted to sob with joy that my husband was finally home after surviving a serious accident, but those three strangers were there intruding on our emotional homecoming. (It still bothers me to this day.) I wiped away at my face and swallowed it back.

Neither Gary or I had eaten since noon, and he hadn’t used a bathroom for even longer. My heart broke for him, that he had to find a way to go with those three women nearby.

It was 8:45 when they finished their eval and finally left. I dug through the refrigerator and pantry for anything to eat in a hurry. We were starving.

The following day, Max and Gary were inseparable. Despite being worse for wear, my family was finally all together at home again.

That first full-day home gave us a sort of euphoria, but it didn’t last long.

Come see him on his feet again here.

Has anyone ever intruded on an emotional moment for you? If so, what did you do?

15 thoughts on “The Arrival”