After being dealt a bad hand of cards, Nana grumbled, “This shouldn’t happen to a dog.”

Grandma used her usual phrase, “Wouldn’t that frost you?”

All four of my grandparents played a game of Continental Rummy at the table in Mom’s gold and brown kitchen. If the cards they held kept coming up bad, an eruption of Italian swear words echoed throughout the room.

They were friends and frequently hung out at our house. We all lived within a mile of each other in the suburbs of Chicago.

“Come sit by me, Lori.” Grandma patted the chair next to her. “You can be my good luck charm.”

I played this game with them before and understood what Grandma needed to do after peeking at her cards.

“Vaffanculo!” Nana spouted the first cuss word of the night and tossed her cards face down in the middle of the table.

The rest of them flicked their cards toward the dealer.

Grandpa Jim scooped them up and shuffled.

“See, you did bring me good luck.” Grandma covered my cheek with a barrage of kisses. “Come sei bella.”

I didn’t know how to speak Italian, but Grandma said those words to me many times. They meant “how beautiful you are.” Not to worry, I didn’t get a big head. Sometimes she said, “Come sei brutti,” which meant, “how ugly you are.” She liked to balance things out.

“Oh, remember how adorable she looked in the communion dress I sewed for her?” My dad’s mom, Nana, reminded us for the umpteenth time.

I took my first communion at age eight, three years earlier, and she still talked about the dress. Somehow I understood her tendency to brag came from insecurity. Humoring her helped me to get along with her better than some others in our family.

“Yeah, I remember the dress. I loved the furry collar on the coat you made for it too,” I championed.

She chuckled. “Yeah, you kept running your fingers through that fur.”

Nana standing proud next to me and the dress she sewed.

Grandma touched my shoulder, her cotton-candy-teased hair stuck in place. “You looked like Shirley Temple with your hair in those curly locks.” 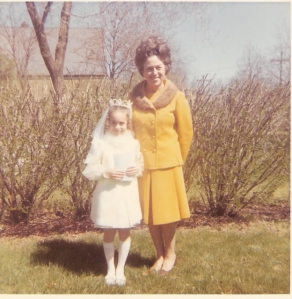 Grandma and me. Isn’t she stylish?

“For crying out loud, Speck, pay attention! It’s your turn.” Papa scolded his wife. My stout but fit maternal grandfather complained often. He nicknamed Grandma “Speck” when they first started dating. Of course, many people found it strange. According to him, Grandma wore glasses back then and he shortened it from the word “spectacles.” 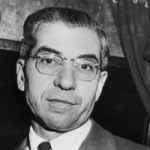 Lucky Luciano – Check out the resemblance to Papa below

Papa resembled the mobster Lucky Luciano and behaved like the character Archie Bunker from the TV show All in the Family. Only educated to the sixth grade, his ignorance came through in his bigotry. He even disrespected Grandma like Archie did Edith.

Turn the coin of Papa, and the other side revealed a sentimental jellyfish. On holidays or some other special family event, tears flowed out of him like a waterfall. He wrangled us in hugs and choked-out words of gratitude.

“I’m out again,” Grandpa Jim said, dropping his cards. His broad build and intense large eyes appeared intimidating, but he had the complete opposite personality from Papa. Mild-mannered and humble, he always offered a helping hand to his family. He enjoyed teasing and playing with us kids.

Grandpa Jim suffered many misfortunes, from being struck by lightening as a child, to almost losing an arm as a result of a ferocious dog attack. The German Shepherd chomped into his forearm on a hot summer day during a family barbeque. The memories of the blood stains on our driveway and my grandfather’s dog being put to sleep, stuck with me.

It seemed the gentle-giant couldn’t even win a game of cards.

Nana got a look at a freshly dealt hand. “What a revolting development.”

The comment caused Grandma to spit out and spew chewed biscotti crumbs across the table. Her large breasts jiggled from convulsions of laughter.

“Ech!” Nana gasped, then brushed off her arms.

Nana’s eyes squinted as she snickered.

Grandpa Jim smiled, and Papa tapped his fingers seriously on the table.

Through a cackle, Nana asked, “Are you laughing at my revolting development?”

Grandma doubled over, holding her stomach, unable to breathe.

We all caught the contagious hilarity, except for Papa. He continued tapping his fingers, waiting for the buffoonery to pass.

Grandma’s chair screeched across the floor when she stood. Trying to speak through laughter, only a whisper came out. “I gotta go wee-wee.” Hunched over, she scuffled toward the bathroom.

What a blessed child, to have all four of my grandparents nearby growing up. Of course, like every family, we had our flaws, but scenes like these happened more often than not. Sometimes their strained relationships with my parents caused problems, but somehow we all made it through.

Grandpa Jim suffered the ultimate tribulation when struck with colon cancer. He fought for two years and left this earth when I was fifteen-years-old. His death was the first I experienced in my young life.

Grandma left us next, in a tragic and unexpected circumstance. Still healthy and vibrant, she died in a car accident when I was twenty-eight.

Papa and Nana lived into their nineties, after I turned forty. They died one year apart.

You can read about these characters (photos below) and more, in my book anthology, here.

I apologize I cannot respond to comments at this time, but feel free to say a few words.

Papa & Grandma after I became an adult 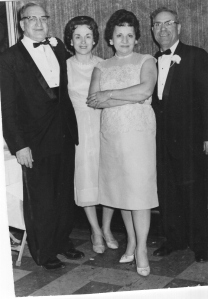 This is all four of them at my parents wedding. They are not paired off with the correct spouses. Left to right: Grandpa Jim (married to Nana), Grandma (married to Papa), Nana, and Papa.

2 thoughts on “The Sweet Revolting Development”