… you’ll probably like this recipe. This one is good for vegetarians too. (The purple font isn’t as close to eggplant color as I wanted it to be).

One day (a long time ago) when I had some time on my hands, I was flipping through TV channels. I came across a dazzling panoramic view of a lonely island in the Mediterranean. It looked familiar. Ahh, yes, it was the Isle of Capri, the place I wrote about in my anthology in the story titled Don’t Blink. Joyous memories flooded my being. I missed my family and traveling to exotic lands.

Once I shook myself out of the nostalgic daze, I wondered if I’d landed on the travel channel.

It was the food network. Little Miss Hotsy-Totsy Giada (aka the smiley cleavage lady) was making her way through the island, shopping and cooking with relatives.

I kid about Giada, I like her cooking show. Reminds me of home. She and her family friend, Renalto, from the island, cooked a scrumptious Eggplant Parmesana. Except, here in America we’d likely call it Stuffed Eggplant. I tried it and it turned out delicious. Here’s the recipe.

1 eggplant or 2 eggplants (or as many as you need for how ever many people you are cooking for)
1 to 4 Roma tomatoes (again, depending on how many people)
1 to 2 tsp. capers
1 or 2 large cloves of garlic chopped
3 tbls extra light olive oil
Grated romano or parmesan cheese to taste
Salt & pepper if desired (my addition)

Cut eggplant in half. Hollow out the inside of each side of the eggplant and then dice into small pieces.

Heat chopped garlic in oil until sizzling, then toss chopped eggplant in and sauté for 3 minutes.

Remove from heat.
Dice up tomatoes.
Toss in diced tomatoes and capers, then stir into eggplant. Salt & Pepper if desired, but capers can add salty flavor.

Scoop mixture into each hollowed out side of eggplant. Sprinkle the tops with Romano or Parmesan cheese. Bake in 350° oven for approximately 30 to 40 minutes, until eggplant skin is soft enough to eat.

Note: Depending on what size eggplant you use, cooking time varies. My eggplant was medium to large. The original recipe I saw on Cooking Channel had small, long and thin eggplants that only took 10 minutes to cook. Mine took forty minutes. 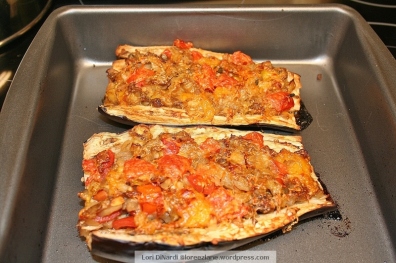